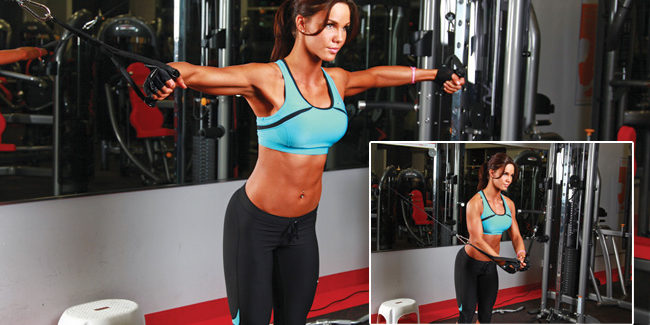 The exercise “Iron Cross” is used in gymnastics at the performances of the rings. In amateur fitness movement going through the appliance portal pulley. While it is one joint and seemingly easy to implement, proper motion required control over many supportive and stabilizing muscle groups. It is important to note that unlike crossover, much like the Iron Cross, the latter has no pronounced accent.

1. Take a left and then a right upper handle reels of portal pulley.
2. Gather folded hands to the body, over her breasts.
3. Bend down and stretch your hands to the body.
4. Slowly straighten by moving outstretched hands in a neutral position away.

1. Carefully lift the outstretched arms sideways.
2. Stop just before your hands reach shoulder level, ie before the critical point.
3. Return them back in the same amplitude in the starting position as you strive to stretch hands after lower point.
4. Repeat.

not bend his arms at the elbows during alignment.
if you are tired or work with greater intensity and advance the critical line of the shoulders, necessarily return to the starting position by reducing arms, bending and stretching with standing. To try to overcome the critical point by bringing carries many risks.

The exercise is functional and complementary. You can plug it into practice for back or chest. I recommend it to people who want to go up muscle strength training in basic movements such as barbell bench press and dial.

Skin types according to the presence of pigments (part two)
February 18, 2021

Skin types according to the presence of pigments (part one)
February 18, 2021

Potassium-sodium balance – How important is it for the Body ?
February 11, 2021